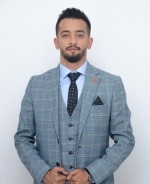 Sejnur Veshall was born on November 25, 1996 in Prizren. He took the first steps of activism in the Roma theater "Nexhip Menekshe", in 2006, where he continued to be part of this theater until 2021. In 2018, at the Skopje festival, where this theater represented Kosovo, Sejnur was decorated with the award as the best actor of the festival "Garavde Muja". He has performed in dozens of plays, as a protagonist and antagonist and was one of the best actors of the theater.

He was the project and program manager at the NGO "Durmish Aslano", which is a hotbed and ambassador for the protection of Roma tradition, language and culture, and has unique departments such as radio "Romano Avazo" and Roma Theater "Nexhip Menekshe".

The US Embassy, the Swiss Embassy, the Luxembourg Embassy, the European Union, USAID, UNICEF, IPKO FOUNDATION, KOSOVAIDEAS are some of the international donors with whom Seinur has cooperated.

He was part of the organization "Balkan Onions", from Berlin, where he was engaged in workshops on documentaries about the cultural heritage of the Roma community.

Sejnur was part of several platforms such as: the network of cultural organizations, the Network of youth organizations, Know your rights campaign. He was also the leader of the group “Golden Hands”, an informal group of Roma youth. DokuFest, Autosrada Biennale, Lumbardhi, Nevo Koncepti, Romani Baxt, are some of the organizations with which he collaborated.

Sejnur was the moderator of cultural shows on the radio "Romano Avazo".

Sejnur's academic background is in the field of Psychology. He has attended a series of workshops such as: Human Rights, Writing and Implementation of the PP, Media and Civil Society, Policy Making, Career Development, Youth Exchanges ERASMUS +, etc. He participated in the football school "Liria" in the municipality of Prizren, for the U17 age group.

Concisely, Sejnuri is a human rights activist, with a strong emphasis on the Roma community and a proponent of preserving Roma culture, tradition and language.

He speaks Albanian, Roma, Turkish and English. He is married and has one child.