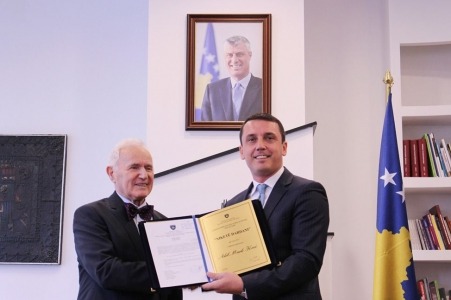 At a ceremony organized in the Office of Minister of Culture, Youth and Sports, Kujtim Gashi, was awarded the National Prize on Life’s Work "Niket Dardani" and annual prize for musical works for 2017.

Minister Kujtim Gashi initially welcomed everyone. He said that "this is a ceremony organized by the Ministry of Culture, from the state of Kosovo, in gratitude for your contribution to the music field".

The Minister also expressed gratitude and thanked all the receivers of these prizes given by the Ministry of Culture, Youth and Sports.

"For me as a minister, but also for the Ministry of Culture, the state of Kosovo is a special honor to have creators in Kosovo, such talented artists that with their activity, their creativity have kept the music alive in Kosovo. The prizes we handed out today are appreciation and gratitude for your work. As a state we feel proud of the work you have done on all stages. It is a historical moment that it is time for us to appreciate your work not only with financial support but also with the evaluation of the work because your work can never be paid in monetary value so I am very grateful and I thank you on behalf of the Kosovo government and my personal name you are doing a very good job in the music field", said Minister Gashi.

In addition, Minister Kujtim Gashi said that this was a turnaround year after the 50% wage increase decision was made for all creators, as an evaluation of their work and engagement, and also once again stressed that Nexhmie Pagarusha had received her special status. "I believe that some good moves have been made in this direction and I believe that we will not stop and all the creators and artists will have the strong support of the Ministry of Culture in all aspects", said Minister Gashi.

On behalf of the jury which was composed of Porf.ord. Valton Beqiri-composer and pianist, prof.ass. Baki Jashari-composer and conductor and Ass. Dafina Zeqiri composer, spoke Valton Beiqiri who explained that in addition to the prizes, the winners were also awarded financial rewards.

"On behalf of the commission, I would like to express my gratitude to all the creators who have competed in this competition. I would like to emphasize that this year has been quite fruitful by the number of works. And especially as a commission we have managed to promote and stimulate the creativity of young composers also seen from the awards that have been given this time, and this is also a proof that the price for music of the Ministry of Culture is giving its fruit and creative young people are active in the field of musical creativity", he said.

The National Prize on Life’s Work "Niket Dardani" was awarded to composer Akil (Mark) Koci and according to the Rules for the awarding of music prizes, it also includes a financial reward of five thousand Euros. Also, the price was accompanied by a plaque.

The prize for vocal-instrumental and musical-stage works was awarded to the composer Krist Lekaj for the work "Requiem". He also received financial means worth five thousand Euros.

The award for orchestral-symphonic and concert works was awarded to composer Mendi Mengjiqi for the work "Symphony". The winner of this award was awarded four thousand Euros.

The award for the chamber work was distributed to composer Ardian Halimi for "Quartett" and was awarded two thousand Euros.

The prize for choral works was given to composer Kreshnik Aliçkaj for "Siparantum" and along with the prize he was also awarded the financial reward in the amount of one thousand and five hundred euro. Meanwhile, the prize for solo and duo works was given to composer Blondi Krasniqi for the work "Temë me Variacione" and also received one thousand Euros.

The laureate Koci thanked Minister Gashi, MCYS and jury for evaluation and award. "This day for me is really a fantastic day, a day of joy because my colleagues Krist Leka, Fahri Beqiri, have not forgotten me and I believe they will soon come to this place where I am", said the composer emphasizing that "The very fact that the ministry has decided to reward us is a fact that has begun the right path because we have so far been left behind. The composer's association has worked hard but the stimulation has been extremely small for the work of the association. Therefore I urge you as a minister to be more careful because musical creation is the basis of culture in general. We are familiar with our works abroad across Europe", concluded Koci.

Also, the winners of other prizes, the appreciation for their work considered as an institutional acknowledgment and an encouragement to work even more on musical creativity.